I woke up this morning thinking intensely of my friend Thom Jones (and the other night I actually dreamed I was writing like him) so after I made my tea, I sat at the computer, intending to write to him because I hadn’t heard from him in a while.  That’s when I discovered—via his Facebook page, of all places—that he died on Friday 10/14.  I was travelling all weekend and not was not online much to check emails or Facebook. So my first reaction on learning that he’d died was shock—that such a driving force of goodness and intelligence could just disappear (although, given that both Thom and I believe in reincarnation, we know that his mind/soul lives on and will delight us again in some other form); then there is the guilt that so many months have passed without my reaching out to check in; then there is the sorrow that life is indeed very short and very impermanent.

Thom and I met through my role as an editor at various literary magazines in New York City and also through our mutual friend Alice Turner, who died two years ago.  Thom and I shared a love of books (but not so much of having to write them), a love of dogs (which should be listed first), and complicated brain chemistries and life histories that left us both prone to intense depressions. And thus prone to be writers.  He was, in so many ways, my de facto psychopharmacologist (back in the days when I took meds) and my de facto shrink. A number of times, especially during the “get me off this planet” years, he probably saved my life. His humor was one of a kind. Truly.  You’d have to read his stories to know what I mean.  There was no writer like Thom Jones and this is why still, to this day, zillions of aspiring writers try to write like Thom Jones. But miss the mark. Because you can’t be authentic by trying to imitate someone else.

Thom’s world view encompassed so much—light and dark, good and evil, truth; always Truth. Thom saw and described the world as only a depressive, genius, and sometimes off-kilter person can: as both beautiful and terrible. Poignant and banal; supremely intelligent and idiotic. Thom understood and accepted that such dichotomies exist. That you can’t have one without the other.  (We had many conversations about duality). And that, in the end, Beauty always wins. So it’s no wonder that Thom was one of the first authors to write—full force, no-holds-barred—about manic depression and AS a manic depressive. And certainly to first to make it all seem comic. And therefore bearable. And temporary.

Those of you who read authors’ acknowledgements page (and most writer and editors read it first, before reading the book) know that Thom broke ground in his acknowledgements page by thanking a Big Pharm company—I think it was Eli Lilly?—for providing him the opportunity and the sanity to write (I should find that page and quote it properly, but I am away from my books right now).  Before then, not everyone was willing to admit they struggled with psychological issues and/or that they took medications to cope.  Both the struggle and the ways in which one attempted to cure such struggles were considered shameful things. Dark. Scary.  Thom helped take that shame away.  And I know he became a willing confidante, cheerleader, uncle, friend, mentor and counselor to many a young writer struggling with the “curse of a creative mind.” His simple kindness and total lack of judgment has helped many, many people I am sure.

I also had the honor and pleasure of editing Thom, which gave me a cherished window into his creative process. Structurally, his first drafts were often a delightful mess, but one could always see the genius and energy behind his words. (As an editor, I have an inexplicable ability to take messes and make sense of them--inexplicable because I don’t seem to have that skill when it comes to my own life). Plus, in Thom’s early drafts, there was always an irrefutable through-line, and that though line was pretty much, as stated above: life is painfully comic and/or comically painful, but beauty and love always prevail.  Other editors/readers might see a different through-line, but that is also the genius of Thom’s work. It operates on so many levels.

I’ve used Thom’s brilliant—sorry, I meant f*cking brilliant—story “Cold Snap” in all of my creative writing classes since 1998. My strategy is to bring this one out about three weeks into the semester, after we’ve read and discussed a few modern classics and gotten a sense of typical story structure. Then—wham—I offer them Thom Jones and enjoy the pleasure, again and again, of witnessing their reaction, of feeling what they feel, which is basically “you mean I can write as myself, with a voice?”  Invariably, some students will then try to write using Thom’s voice, and, if I’m successful as a teacher, I can help them find their own voice, which sounds cliché, but is the essence of all creative writing.  What I’m trying to say here is that Thom Jones is/was one of those authors who can help an aspiring writer find his/her own voice. His work gets writers excited to write. So read him. And love him. And celebrate him.  He took on a lot of pain in this lifetime and gave back reams of beauty, of life, of wonder.  That’s what a true Artist does. Praise him.

I haven’t gone through my correspondence yet to highlight all the nuggets of advice I’m sure to find in his many emails, and I look forward to reading some of our exchanges about Schopenhauer  (Thom’s favorite philosopher) and Buddhism (my guiding force) but for now I am just going to sit with this feeling of awe and gratitude and wonder, that a man with such an “untamable” and “poisoned” (not my words) mind could put forth so much kindness and generosity and joy and peace.  Those qualities are all the antidotes to poison.  Imagine the amount of energy and essential goodness it took? To transmute one’s own mental poisons into beauty for others to enjoy?   Thank you, Mr. Jones.

Here’s an oft-quoted quote from an interview in the Mississippi Review: “I channeled my obsessive-compulsive behavior into my writing and soon found that if I wrote a lot each and every day, a kind of psychological integration took place within me and a form of peace became available...”

Thank you, Mr. Jones. You were a true Champion in this lifetime. May you now dwell in the purest of Pure Lands.  Om Ami Dewa Hri.

My heart goes out to his family, including his sweet-faced Boxer-dog Sugar. 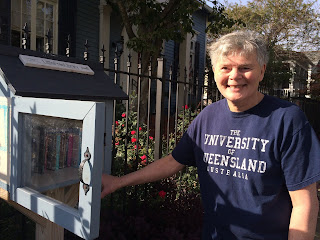 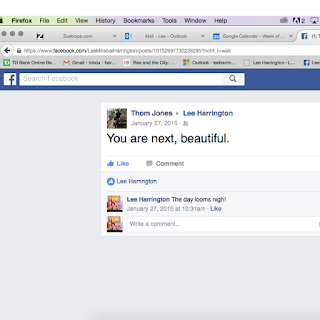 Posted by Lee Harrington at 9:29 AM

Huge Thom Jones fan, here. Been scouring the internet for any and all anecdotes since I just read of his passing. Wonderful post about a true Champion, like you said. Was hoping for that Africa novel that expanded on the Ad Magic character and maybe included the all-too human orangutan, George Babbitt. Makes me want re-read about 'ole Georgie's adventures on the fringe with Koestler and that gang of eccentrics and last-chancers. Thank you for writing this lovely remembrance and sharing a slice of your interactions with him. It was fascinating and comforting to read.

Thanks for reaching out, Jerry Olsen! I hope we'll all get to read some. or all, of his unfinished novel in the future. I hear it's absolutely genius. I'm grateful that I was able to offer some comfort. We're all going to miss him.
All Best Wishes to You!