Top Five Things Shelters Can Do To Improve Adoption Rates

I was just re-reading an old interview in Bark magazine with journalist Kim Kavin, the author of LITTLE BOY BLUE: A Puppy’s Rescue from Death Row and His Owner’s Journey for Truth.

Bark asked her:  "What five things can shelters do to improve their adoption rates?"

Kim answered:
1.   Make adoption a priority. At the shelter where Blue was found, unless a rescue group intervenes, the annual kill rate is about 95 percent. It is accepted as policy that the majority of dogs will die. Shelter managers need to make it a policy that rescue and adoption are a big part of the job. Nationwide, this attitude is the first thing to change in shelters that improve their adoption rates.
2.   Hire people who embody the philosophy of rescue. Sometimes personnel changes are necessary, but sometimes people can grow through education. Either way, you need people on-site every day who care about adoption, and you need to give them the resources and job flexibility they need to succeed.
3.    Give the dogs names. At the shelter where Blue was found in Person County, N.C., the dogs don’t have names; they are given numbers and expiration dates. The adoption coordinator at Robeson County Shelter in Saint Pauls, N.C., told me that when she began working to turn their program around, the first thing she did was name the dogs, because a name shows that someone cares about them as individuals. It affects the entire staff’s attitude toward what happens there day in and day out. It is harder to kill a dog who has a name. It makes people want to do more to help the dogs.
4.   Tap into the nationwide rescue community via sites like Petfinder.com [4] (full disclosure: Barron’s is donating a portion of the proceeds from Little Boy Blue to the Petfinder Foundation [6]). Even if you’re in an economically depressed area and can’t find local adopters, you can find responsible rescue groups in other areas—even in other states—that are willing to transport and foster the dogs while marketing them for adoption. The pipeline exists. Use it.
5.    Take photos of the dogs outside of the shelter environment. With my own foster dogs, the photos I take of them just a few hours after they’ve had a chance to calm down and play in my back yard are far superior to those I get at the shelter. Anything you can do to help them relax will make them look happier and healthier in their adoption photos, and thus increase their chances of finding a home.

Here's the whole interview if you'd like to read it.  This little piece is such a gem!  Coming from the world's best dog magazine, of course! 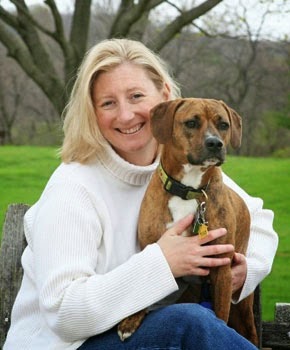 Posted by Lee Harrington at 10:49 AM No comments:

the new, revised edition of REX AND THE CITY has been released!

I wanted to let you know that my book, REX AND THE CITY, has just been re-released. Originally published by Random House in 2006 to critical acclaim, this book was praised as “Hands-down the best human-with-dog memoir you’ll ever read” by Bark magazine. A revised and updated edition has just been released by Diversion Books—just in time for the holiday season.

If you know anyone who might enjoy a book about the joys of rescuing a crazy hunting dog, please consider recommending Rex and the City. We’re donating a portion of all book sales to animal rescue organizations. My hope is that, through this book, more people will feel inspired to rescue needy animals and to appreciate the amazing canine species even more.

With Love and Gratitude,

Lee
Posted by Lee Harrington at 11:57 AM No comments: