Back in April 2007, the wonderful Dr. Wayne Dyer offered to endorse my book, Rex and the City: A Memoir of a Woman, a Man, and a Dysfunctional Dog. I'd been explaining to Dr Dyer that I wanted this book to help abused and abandoned dogs, by telling an honest story of what the experience of rescuing a dog can be like, and he, without my prompting, immediately made an offer to endorse it. What an honor, as he is a man who always keeps his promises! And he's a real animal lover, too. (He calls himself a "cockroach rescuer."). So I feel quite lucky.

Anyway, the vernerable Mr. Dyer is currently on tour promoting his own, stellar book called Change Your Thoughts, Change Your Life. In this book, Dr. Dyer offers his interpretation of the Tao, and it really *will* change your life. In phenomenal ways.

Adopting a dog will change your life too, but Lao Tsu has about two thousand years on me! So I shall defer to my elders. And send out strong waves of gratitude to Dr. Dyer. If anyone hears him mentioning my book, please do let me know! Merci.

Posted by Lee Harrington at 10:06 AM No comments:

My Own Personal Book Burning 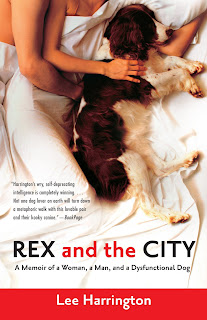 REX AND THE CITY: A MEMOIR OF A WOMAN, A MAN, AND A DYSFUNCTIONAL DOG now out in paperback!


I'm not one to toot my own horn, and I consider that a big fat flaw, especially these days, when books sale based on hype more than they sell on the quality of the actual book. But whatever. I need to be more proud of my work. No more of this I'm-too-shy-I'm-not-good-enough crap. If I don't promote myself, no one will.

So here goes. Four months* ago the paperback version of my memoir, Rex and the City, came out to critical acclaim! I've gotten excellent reviews, and people are actually reading it!

*Yes, four months ago. In this day and age, in which everyone who's anyone (and even everyone who's no one) has a blog, you find that most writers let their readers know about such things in advance. But I was too depressed this summer to get very excited about such things as my very own paperback book launch. That's another story, one I won't bore you with here.

What did I do to celebrate the launch? I set a copy of the book on fire. This has nothing to do with imbalanced hormones, or pyromania; rather, I saw it as a lovely and symbolic way to "let the book go." I literally wanted to see the book transform to ash and smoke and float off into the cosmos. I felt it had a better chance of reaching readers this way.

If you are a Buddhist, or have read any of Wayne Dyer's book, or practice something called "non-attachment," then you'll know exactly what I'm talking about. If you're none of the above, well, just chalk this all off to the fact that I live in Woodstock, New York, and that we do that sort of thing all the time here. There's always something being burned in this town--and not just spleefs! I'm talking ceremonial burnings. Just last week I was invited to a bonfire hosted by a fresh divorcee, and we were encouraged to bring items to burn from relationships that "no longer served us."

Anyway, it just so happened that the day my paperback book was released - June 23, 2007 - was also the day I handed in the first draft of my novel, NOTHING KEEPS A FRENCHMAN FROM HIS LUNCH. Right now I'm wishing I had set that baby on fire as well, but that is another story, one I won't bore you with here (but rest assured that deep depresssions and writers' deadlines seem to go hand in hand).

We waited until the sun went down, which in June was after 8 pm, and then my friend Greg torched up the bonfire and my friend Lilly cracked open the bottle of Veuve Clicquot. We sat on stones surrounding a great outdoor firepit, underneath an enormous, starry, mountain sky. I made a little speech about REX AND THE CITY - how I wished it well, how I encouraged it to move on and out into the world. This book is a memoir, so it will always be part of me--a literal chronicle of my life. But still, I felt it was important to separate myself from it, to not be attached to its outcome, to not worry about who's reading it and who isn't. So I set my book into the fire. Oddly, it didn't catch right away. It just sat there, nestled in the flames, kind of like a passenger settling in before a long flight. {terrible metaphor, i know, but i am taking a medication right now that seems to produce nothing but stiff sentences and bad metaphors}

So while my book sat on its pyre but did not burn, I talked about Wallace - the dog about whom I wrote this book. I thanked him for being in my life, and for being the inspiration for this book. I thanked him for giving me so much love. I didn't go too overboard with this speech, because dear Wallace is dead, and I didn't want to make my bonfire audience too uncomfortable. They are all dog lovers, my friends, but not necessarily the types to make weepy laudatory speeches about their dead dogs four years after the fact. So I kept the real sentiments to myself.

I kept this missive to myself, also: the fact that I silently asked Wallace to watch over the book, this book that now finally had caught on fire. For some reason I felt that this transformation from book to smoke and ash would somehow make the book more accessible to Wallace--or rather, to his spirit. (Call me crazy, if you wish. I have been called better, and worse. ) Wallace had been cremated, after all, and now Rex and the City was being cremated, too. Ashes to ashes. I silently asked Wallace to help this book along on its mission, which is to spread the word about the importance of helping abandoned and abused dog.

So the book burned, and the Veuve Clicquot went down smoothly, and a young man named Clayton played the drums. You could actually hear its echo in the nearby mountains.

In the morning, I returned to the firepit to see what remained of the book and, yes, to collect some ashes to keep in an urn on my mantle. ( I find that sort of thing amusing, and it gives my family plenty to talk about, so why not?). My book, my first book, my little REX AND THE CITY had been reduced to a fine white powder, as soft as talc. The only thing that remained was about two inches of the bookcover--and it happened to be the illustration of Wallace's face. I took this as a good sign. That I was being watched over. And that a force larger than me was watching over my book. I bid it Godspeed.
Posted by Lee Harrington at 11:43 AM No comments: