Minor ashram challenges:The other day I returned to my hut to find that everything I brought has been invaded by ants—there were thousands of tiny red ants swarming over my clothes, my toiletries, my suitcases (inside and out), my tuning forks, etc. Given that I don’t kill insects, it took many hours to bring everything outside and de-antify each item one by one. The solution, I found, was to give the ants something sweet to eat and bless them on their busy little journeys. It was fascinating to watch the ant armies rapidly change course, racing off my new ‪#‎FabIndia‬ scarf toward the tiny piece of banana I’d offered. This summer, I’ll be taking my first “Feeding Your Demons” workshop with Lama Tsultrim Allione at Tara Mandala. This little exercise in feeding my “invaders” felt like a sample of the larger work to come.
Posted by Lee Harrington at 8:39 PM No comments:

It's been a unique birthday...starting with archana, 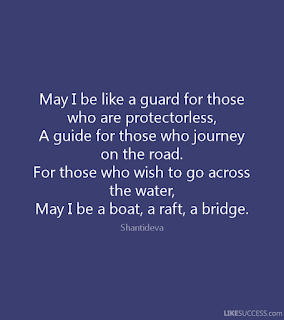 It's been a unique birthday...starting with archana, then tea, then sunrise, then some unsettling emails, followed by sitting onstage with Amma and handing prasad to Amma, then lunch, then a quick rehearsal for my song offering at darshan this coming Thursday, then a walk and a blazing sunset, followed by a dharma talk and, finally, some private time at the Kali shrine, where I asked her to help settle what has been unsettled. I know we are all born for "a reason" but sometimes I still have to search for what that reason is. My hope is that my birth has been a gift to this world--not a curse. And so, as I get ready for bed here in India, I return to my Bodhisattva vow:

May I be a guard for all those who are protector-less,
A guide for those who journey on the road,
For those who wish to go across the water,
May I be a boat, a raft, a bridge.
For all those ailing in the world,
Until their every sickness has been healed,
May I myself become for them
The doctor, nurse, the medicine itself.
~ Shantideva
Posted by Lee Harrington at 8:36 PM No comments: