So You Finish Writing a Novel--Then What? 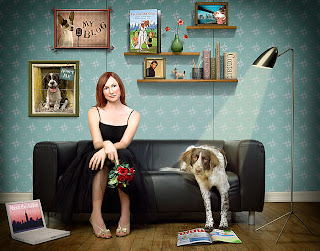 I finished my novel yesterday. Nothing Keeps A Frenchman From His Lunch. Forthcoming from the mighty Random House in 2008. It was due to my editor at 4:30 on Monday, July 18, 2007, (according to our contract) and i pressed the “send” button at 4:27. Voila. Finished. At 4:28 I shut my computer down and thought, okay, now what?

It sucks sometimes being a writer. Even though i have said there is nothing else in the world i could be. It is my lot, my fate, my talent, often my joy but also, often, the thing I hate most.

And yet, and yet, I must remind myself I am so very lucky—honored—that Random House agreed to publish this book. The legendary Dan Menaker bought this novel, Nothing Keeps A Frenchman From His Lunch, on faith alone. He read the first twelve pages and said “I’ll take it.” They offered some money, my agent said “go for it,” and I went.

I spent two years on this book. Two years and 500 pages. In those two years I rejected many offers of dates, dinner parties, no-strings-attached sex, and the chance to meet Viggo Mortensen. Viggo! Is that hari-kari or what?

Writing is a gamble. Especially if you are my type of writer, the one who sets everything aside for the sake of my “art.” I lost a husband because he knew he would always come second to my book. Now he is engaged to another writer. Who cooks for him and puts him first. My husband fell in love with me because I was a writer devoted to her writing, to determined to “make it” in the writing world. Then he began to resent me for the very same reason. I fell in love with him because he was (among many wonderful things) responsible and a caretaker and a take-charge kind of guy. I left him for those very same reasons. I wish him and his new writer-wife them well. In a way, I envy them. I envy all those who live a real life. Who put Life before Art.

Writing a novel takes all of your time. You start to live through your character rather than your own self. It’s hard to explain. Writing a novel is like spending two years, alone, with many fictional characters, on a submarine. Submerged at the bottom of a dark ocean. And although I must confess my characters are fun, there is still the submarine aspect. In those two years, I “forgot” to eat a lot. I forgot to call back friends. I angered three friends, to the extent that I suspect they may have dropped me. I don’t even know because I have been in a submarine. But my characters—they have loads of friends. They have great sex, eat good food, go on adventures, travel to France, win triathlons, win, at the end, Mr. Right.

Is this why I am a writer? To create a perfect life? One that, in reality, I don’t have?

In reality, I have no children, no husband, no savings and now, no home. I kind of “forgot” to find a new place to live in when the house I was renting sold. I “didn’t have time” to find a place to live I (drum roll please) “had to finish my novel.”

When you are writing a novel you have to set your whole life aside. In order to “finish” it. I’ll find a mate when i “finish” the book. I do those dishes when I “finish” the book. I’ll—Lord have mercy—open that gargantuan pile of mail (but trust that I have already weeded out all the freelance checks). I’ll get the car fixed, take the dog to the vet, return the email to the editor who wrote me two months ago asking if I’d like to write another memoir.

Can a novelist even write a memoir? A memoir about how writing a novel means you have no life to write about? And on and on it goes. I guess I could write about being homeless, while my main character lives in a villa in the South of France.

The best direction I plan to move in is to become a rock star. My brother gave me his guitar. I am going to learn how to play it. By the time I am eighty I want to be the female Jimmy Page. With those fingers, that focus, that angelic, poised face. I even want that dragon jacket, which will look rather comic on an eighty year old woman, but who cares when you can make music like that.

Talent is a curse, my writing instructor once told me. Because you have no choice but to use it. It’s a contract you make with Source, I guess. Before I was born, I probably signed a legal binding contract stating that I would turn in my second novel at 4:27 on June 18, 2007.

So there. I am finished. I have returned to planet earth, never again to descend to the bottom of the ocean in a small iron submarine. And so I say, to God, Goddess, Krishna, Buddha, Tankashala, Allah, St. Francis, Archangel Michael, Viggo, Sai Baba, the moon the sun the stars: all off you guys. I did what I was deigned to do. I release my novel, and my first book, Rex and the City, to you and to the universe and to all sentient beings.

Now give me my hundred thousand bucks. And a diploma or whatever it is St. Peter doles out. I now wish to channel the divine consciousness of Jimmy Page. Thank you very much.

I wonder: do gods read blogs? Do the gods have time for blogs? Or are they too busy trying to reign in George W. Bush, and put a stop to the devastation he is inflicting on this planet?

Is anyone on this planet reading this blog? That’s a topic for another day.....

So. Dear someone, I thank you for listening. For considering my words. It is for you I wrote this novel, I guess—you of the great, grand void. May you read it well.

I do have a rock band, as you might have surmised from the two-year-old blog.

But I'm self-publishing my second rock music novel, even as work begins on my third. I've got a well-known agent that said she's going to work with me on book #3 (as she feels I need some guidance on how to properly position and write the book so she can sell it).

As a director of institutional sales for a Wall Street firm, with a wife and two kids and also running my own rock band, the book is part of the music umbrella I stand under. I admire the fact that you can dive in like that but I am unable to do that.

I just don't have that kind of situation. So I get what I get.

My sister co-owns an English Setter and a slew of Brittanys.

I'm on LI but we play in NYC on occasion. We have a show on LI coming up in mid-September.

Drop a line at rockjf@aol.com so we can chat at each other's leisure.

I grew up with golden retrievers but we now have a 2-yr-old cavalier king charles spaniel in the popular blenheim color (there are 3 other shades). And Mojo is a great doggie...lots of fun with him! I do hope yours is doing well...chat soon!

Sully,
I'll try to come out to LI in mid-September. I have a friend in Montauk I plan to visit, so maybe the timing will work out. It would be fun to meet.

It seems as though we have a lot of spaniel lovers in this community. (sully, lucy, moi) My dog Chloe is half French Spaniel and half Border Collie. I love Brittanys and King Charles and English Cockers....all of them. I'd have seven dogs if I had the room.

Hi Lee,
It's me. Just wanted to let you know that am reading your blog and I love your words. If you haven't done so already, may I recommend that you sign up to Rachel Fuller's blog? I've got a feeling that you two could be great friends.

Hope to meet you some day soon.

Hi Denise - thanks for the tip on Rachel. I checked out her blog at your suggestion and see that she is involved in animal rights causes (she is trying to help with the ban on puppy farms). So I do see a kindred spirit in her.
I love dogs and feel that one of missions in life is to help them. So i donate a portion of my books sales to a local animal shelter--the one from which I adopted my wonderful, soulful dog.