Last night I visited my good friends Mindy Pickard, Gregory Lee Pickard and their son Clayton Pickard who were among the first people I met when I moved to Woodstock in 2005. I actually met them--like many dog people do--through our dogs. Their dog Rainbow is/was my dog Chloe's "husband" (Clayton having performed a quick wedding ceremony for them a few months before Chloe unexpectedly died.) Rainbow will always hold a special place in my heart--not just because Chloe loved him above all other dogs; or because he is an English Setter mix (and I secretly love setters above all other dogs); but because he is just so extraordinarily fun and smart and expressive and exuberant. He's one of those human dogs---dog lovers will know what I mean. Anyway, I was shocked and saddened to learn that Rainbow has gone blind. Apparently he has diabetes and his family didn't realize how quickly this illness would manifest. 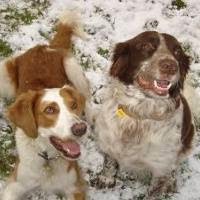 Rainbow was sitting outside on the front steps when I arrived at their house, but he didn't get up. I immediately went up to him and hugged him, of course, and Rainbow whined in return--but it was not the whine of sorrow; he simply recognized my voice and my smell and was happy to see me. He looked so different with his filmy, non-seeing eyes. He looked both younger and older. Older because of the filmy eyes, and younger because of his lost, somewhat uncertain expression. Rainbow has always been a bold dog--pushing through doors; leaping over fences; jumping off decks and out of second-floor windows unscathed if he objected to being left inside. Indeed, Rainbow was the one who taught Chloe how to open doors and--if need be--push through screens. Rainbow did what he wanted, when he wanted, and he did it with such exuberance and single-pointedness that you couldn't get mad at him. He had a mission and his mission was to have fun and be with the ones he loves.

I started to cry, of course--A) because seeing my Rainy-bow makes me miss Chloe and B) because everything keeps changing, and everyone I love keeps growing old. Rainbow, sensing my distress, stood up to lick my face. Then Mindy opened the door and-- being a practical no-nonsense sort of person who doesn't want people crying at her house--told me to come inside. She also told Rainbow to go make his pee-pee so that he could come inside too. "And be careful on those steps," she told him in her motherly voice. "Go slooooow."

I watched Rainbow as he made his way down the steps and out into the yard. This new Rainbow moved slowly and cautiously, the way a mole might, pushing his snout along the ground to sniff his way through any potential obstacles. He lifted his leg, did his business and then quickly returned to us, bumping into our legs as we all walked into the house. He didn't seem to mind the fact that he couldn't see, as long as we were there with him. (Greg and Clayton were still out at the grocery store but were due back any minute.)

Anyway, I could go on and on about witnessing the gestures, movements and behaviors of a newly blind dog...and maybe I will in the future, if I have the opportunity to spend more time with Rainbow. Part of me is still sad that I didn't get to witness Chloe's golden years; and part of me is grateful that she passed so quickly, from great health to poor health to death, in a matter of days. But I do finally realize that there is no such thing as perfect--no perfect way to age, no perfect way to die, no perfect way to adjust to an illness.

When Greg and Clayton returned, I saw signs of the "real" Rainbow: he ran to the door, leaped in circles, and barked with joy. As soon as Greg walked into the door, Rainbow began nipping at his (that would be Greg's) crotch. This is one of Rainbow's signature moves, and Greg wears loose jeans specifically for this reason. I was impressed that Rainbow could still find his target despite his poor vision. What moved me most last night was the way the family handled Rainbow: so tenderly. So lovingly. Mindy coached Rainbow around the furniture. Greg took him out to play fetch in the yard, but this was a new version of fetch, which Greg called "hide and seek." Greg would toss a toy duck a few yards in front of Rainbow, and Rainbow's job would be to find it (by sniffing) and bring it back to Greg. A simple task, but joyous nevertheless. Gone are the days of launching tennis balls far, far into the woods from a rocket launcher and watching the dogs tear off at full speed into the trees. Gone are the days of dog youth, I guess. But life for a dog always just goes on. Until it doesn't. The attitude never changes.

Rainbow receives his veterinary medical care from the same vet that Chloe used to see--the marvelous Dr. Rothstein at Saugerties Animal Hospital. And apparently there's a chance that they could perform cataract surgery on one or both of Rainbow's eyes. The catch is, the procedure is expensive and the family might not be able to afford to repair both eyes. They're in the process of debating all this right now. Rainbow is ten years old. First they want to get more information on the root causes of the blindness and the diabetes and then make a decision based on that. I'll keep you posted, because if they decide to go ahead with eye surgery, I said I'd help promote their Kickstarter campaign. It would be an honor to help my beloved dog-in-law and his family, in Chloe's honor. It's what she would have wanted.
Posted by Lee Harrington at 7:18 AM