More from the Chloe Chronicles: "Springer Has Sprung" 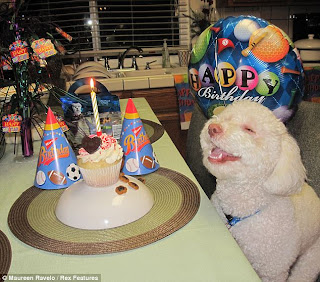 Like many people with rescued dogs, I do not know the exact age or birth date of my French Spaniel mix, Chloe. When I adopted her in the fall of 2004, I was told she was between six months and one year old—which is a wide margin, considering how much a dog grows in that first year. And while part of me wanted to believe she was at least a year old (because she weighed 55 pounds at the time and I doubted that I could physically handle anything beyond that), I decided to give Chloe a March birthday.
Why was this important? Because I wanted to throw Chloe a birthday party, of course. We always welcome a reason to celebrate our new shelter dogs, and what better day to celebrate than March 20—the first day of spring.
Spring in New York City is particularly glorious, in part because we New Yorkers have to endure such harsh and miserable winters. One could argue that New York dog people are exposed to more than our fair share of the harshness in winter, because we have to take our dogs outside at least four times a day. This is not to say that having to walk our dogs is anything to complain about at any time of year, because we love, love, love our dogs. But, to be perfectly honest, walking a dog through ankle-deep slush in the freezing rain (rain that somehow manages to rain sideways) is not fun. I can’t say I unequivocally enjoy it. Just don’t tell my dog I said that. (But sometimes, not even she enjoys walking in the sideways-sleet. So there.)
Anyway, winter is behind us now, and signs of spring in New York City are everywhere. On the sidewalks, you’ll pass dozens of mini-gardens planted in the city’s tree beds and protected by low iron fences. Because volunteers or townhouse owners or neighborhood associations take charge of these mini-gardens, each one is different and beautiful in its own unique way. Beneath one tree you might see clusters of purple hyacinth mixed with white dwarf daffodils; the next flower bed will contain clusters of colorful primroses arranged within tight tangles of ivy; next: a riot of eye-popping tulips in pink, orange and red. It’s wonderful to see so much color after so many months of gray. We start walking our dogs almost 10 times a day because we just want to be outside, soaking up all that beauty.
Often you’ll see little signs posted at the base of these tree beds, with the message: Please do not let your dog urinate on the flowers, and we dog people always respect that request, because spring in New York City is a time of happiness and renewed hope. Every New Yorker is in love with the world in spring, so we are kinder to one another, and more considerate. We smile and make eye contact. We take time along the way to smell the flowers, as they say. Thus, no one messes with the flowers. Plus, as I always tell the dog, there are plenty of other places to pee in New York.
But getting back to Chloe’s birthday. Many people scoff at the idea of throwing a dog a birthday party, but those people are usually not dog people. They might not understand our belief that each of our dogs deserves his or her own “special day” just as we all deserve one. Or two or three or three hundred and sixty-five. One could argue that with shelter dogs, the desire to create a special day is even stronger, because these dogs may have suffered cruelty or neglect. These dogs may have spent months in cages, without being treated as “special” at all.

So bring on the marching band because we’re having a party.
Now, New Yorkers are known for going over the top when it comes to parties. I know people who have spent hundreds, if not thousands, of dollars for doggie birthday parties and doggie weddings. There are bakeries that make chicken-andoatmeal birthday cakes frosted with liver pâté. There are doggie daycare centers that rent out party rooms for more money than you’d pay for your own wedding reception. There’s even a boutique that sells tiny rhinestone “Happy Birthday” tiaras for lap dogs to wear to parties on the Upper East Side.
I am not judging any of this. I celebrate any occasion at which a bunch of dogs get to play and have fun. But, being a writer, I was on a limited budget; therefore, Chloe was not going to have artisanal foie gras “pupcakes” at her party; nor was I going to rent a 3,000-square-foot space and hire an agility instructor to teach all the dog guests to leap over hurdles and shimmy through plastic tunnels and hoops (bummer). Also, I don’t cook, which meant there wasn’t anyone in my household who was going to spend four days constructing shepherd’s pie cupcakes from organic buffalo meat, vegetable terrine and mashed fingerling potatoes. No, I was going to keep this party simple. 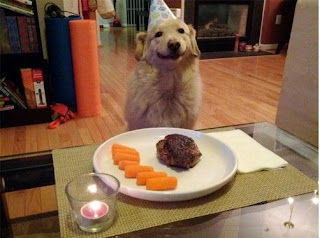 The postscript to this story is that my 55-pound dog soon blossomed into an 80-pound dog. This had nothing to do with birthday cake. My French Spaniel mix now had the long and wide-ribbed body of a Labrador Retriever. This also meant that Chloe probably was born around March after all. She was a spring baby, as welcome as a new flower. Which is always a cause to celebrate.
Posted by Lee Harrington at 8:47 AM

Delighted to find your blog. I enjoy your writing. I loved Rex and the City. I am so happy you were able to move on and open your heart to Chloe. Happy belated birthday to Chloe!

Thank you for the compliment, Beth. And I am sorry for the delay in my reply. This post somehow got filtered into spam (as if!)
Always nice to hear from you!
Love to you and yours from me and Chloe....