Occasionally I take time off from writing about my late great dog Wallace to write about my current great dog, Chloe. Let's call this installment "Insight Unseen" 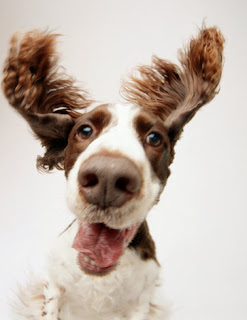 It’s not unusual these days for perfect matches—between humans and humans, animals and humans, even animals and animals—to be made online. Typically (in the Match.com department, at least), the humans actually meet before agreeing to make a full-time/life-long commitment. So is it crazy to adopt a dog you’ve never actually met face-to-face?

I did exactly that. I adopted my dog Chloe before I even met her. Crazy? Read on…

Many of you may be familiar with my previous Bark series (and book): “Rex and the City.” In this series, I chronicled my experiences trying to raise an unruly—but loveable—shelter dog (Wallace) in a 300-square-foot-apartment in New York City with an unruly—but loveable—boyfriend. In 2002, our relationship ended and Wallace died tragically. All within a few hours. I officially left Ted on the morning of November 23; that evening, Wallace was killed in an auto accident. (See “Rex: The Story Ends,” Bark, Jan/Feb ’09).


I knew that one day, when I was ready, I would adopt another dog, but “readiness” is such a relative and fickle thing. Sometimes I would log onto Petfinder.com and type “Spaniel” into the search engine just to see who was out there waiting for a home. But none of those 800+ Spaniels ever felt “right.”

I wrote about my new-dog quest in the aforementioned essay, but in a nutshell: after a two-year search, I finally came across a French Spaniel mix on Petfinder. Her name was Buffy, and she was being fostered by an affiliate of an English Setter rescue group in Michigan. She was listed as one year old, sweet and good with other dogs.

What struck me was Buffy’s photograph. She was looking straight at the camera, smiling, rushing forward as if she couldn’t wait to give the taker-of-the-photo a kiss. Finish what you’re doing so that I can love you up! she seemed to be saying. Her big white tail wagged behind her in a blur.

My fantasy crush Pete Townshend once wrote, in his song “Now and Then”: Now and then you see a soul and you fall in love/You can’t do a thing about it. That’s how I felt when I saw Buffy’s photograph. In that instant, my whole body began to tingle with certainty. I knew in my heart that I had found my dog.

My mind, however, disagreed. I had an incredibly wily and cantankerous mind back then, one that constantly tried to talk me out of doing anything fun. I called her “Hulga.” Hulga said, Buffy’s in Michigan, and you’re in NYC, and most rescue groups won’t adopt out beyond certain regions. You know how strict they can be. Why even bother?

Because it feels right, my heart answered. I picked up the phone.

It turned out that the adoption coordinator who answered the telephone—I’ll call her Amy—had heard of me. She’d been a fan of Bark and my column for years. The ease with which we spoke—and the camaraderie that quickly developed—was encouraging.

Amy said that Buffy was very sweet and loving. Her favorite things to do were to chase cats, eat cat poop and run through corn fields. I loved this latter image—a free-and-easy bird dog, galloping through tall green rows of corn, dodging down this row or that, occasionally springing into the air to sight and orient herself. It suggested pure joy and freedom. In NYC, our corn comes from corner delis—those tiny pickled cobs you find at salad bars.

“You should know,” Amy said, “that Buffy does have problems. She barks a lot and whines and paces and chews.”

I knew these to be signs of anxiety—most likely, stress caused by all the shuttling from shelters to foster homes. I also knew some people would label this as “problem behavior” and refuse to take the dog. But I’d been through this anxiety phase with Wallace, and we had worked it out.

Amy said Buffy was found wandering on a college campus. She was brought into a local kill shelter, where a woman named Kat discovered her. Kat was a cat person, who visited the shelter daily to rescue Abyssinians for her breed-specific group. When Kat saw cute, friendly Buffy, she contacted a local English Setter rescue group, and within a few days, Buffy’s profile was online. “It’s such a coincidence you called today,” Amy said. “We literally just posted her.”

But I was starting to think there is no such thing as coincidence.

“I have a good feeling about Buffy,” I said. “I believe this was meant to be.”

“Normally we don’t adopt out of state,” Amy said.

See? Hulga said in my mind. I was right.

“But we may be able to make an exception,” Amy added. “I’ll just have to consult the board.”

Oh, no. The Board. Six months earlier, I’d tried to adopt an English Setter puppy from a strict rescue group in Pennsylvania. Their rejection left me traumatized for weeks.

“Buffy’s very destructive and high-strung,” Amy said. “She’s hard to manage. You should think about it for a few days, while I consult my colleagues to see if they’d be willing to relinquish a dog to a strange New Yorker.”

So, I thought. I probably thought too much. Hulga had a field day. I asked myself: what am I doing, taking on another “problem dog”? I’d spent six years with a problem dog, and sometimes, quite honestly, it wasn’t fun. I’d had to contend with dog fights, dog bites and thousands of dollars worth of damage. Minor stuff, I told myself. In comparison to all that dog joy and dog love I received.

But this is a dog we’re talking about, not one of those men things. I reminded myself.

A dog you haven’t even met, Hulga said. Who sounds dysfunctional.

What if there was more to this dog—more “problems”—that Amy wasn’t elaborating upon? What if it turned out that I couldn’t manage Buffy’s problems alone? I was a single woman, and—at the time—bitter. I planned to remain single for the rest of my life. Would a so-called “easy” dog be easy enough for a singleton in NYC? And what had Amy meant when she called me a strange New Yorker?

The questions were endless. I drove myself crazy. Or rather, Hulga drove me crazy. This is what happens when we think too much—an epic internal battle of mind and heart, logic and intuition (with an unhealthy dose of Hulga thrown in).

Finally, I visited Riverside Park to watch the sun set beyond the Hudson River. The Hudson has always given me perspective; it is the kind of vast, forgiving river that helps one make choices. As I stood there, a woman walked past with a giant Mastiff who loped along with a goofy grace. The dog looked so happy to be outside in the park with his friend. And so did she. In that instant, I knew Buffy was truly meant to be my dog. I decided once and for all to follow my heart.

When I called Amy, I felt fizzy with excitement. Amy said I could have Buffy “whenever I wanted.”

“So the board has approved?”

“What? Oh, yes,” Amy said distractedly. Something seemed off. But I’ll have to save that story for another day. It took four weeks for me to actually get Buffy (another long story involving Buffy actually being adopted—and returned—to five other people in the interim). But soon, I had secured an “arrival date” for Buffy. She would be accompanying a volunteer on a plane to NYC.

I had ten days to prepare.

Rehabilitating Wallace had taught me a lot about dogs. Writing for a dog magazine had too. I now knew what kind of training worked best (clicker, positive reinforcement), what type of diet was healthiest (raw, organic) and which veterinary treatments worked best. I’m not saying I’m an expert on dogs, but at least I wasn’t as clueless as I’d been when I adopted Wallace. I felt confident. I was going to work with Buffy’s anxieties, restore her confidence, provide her with consistent and loving guidance, and gently alter her behaviors.

First, I cleared my calendar, rescheduling any appointments that would take me out of the apartment. I wanted to stay with the dog 24/7 for a solid three weeks. Next I researched how to treat anxiety using holistic methods. I stocked up on flower essences, aromatherapy oils, herbal supplements. I bought marrow bones (an essential ingredient if your anxiety-plagued dog is a chewer) and two pounds of raw chicken to help strengthen her immune system. I also stocked up on music. Yes, music. (See http://www.thebark.com/content/soothing-songs-anxious-pup

As Buffy’s arrival date drew nearer, I purchased other essentials: A cozy, vintage-floral-patterned bed;  a pretty new leash-and-collar set. A soft fleece blanket with which to cover the sofa, which I knew would be covered in dog hair within three hours of the dog’s arrival. All of the above were pink in honor of my new girlie-dog. I bought doggie paw-wipes for rainy days, Musher’s Secret for snowy days, hair brushes (pink!), toys, treats (exotic NYC treats like dried kippers and ostrich skin), even a Halloween costume (more on that later).

Next, I posted on ManhattanDogChat, announcing the arrival of a new pup in the neighborhood who’d be looking for play-dates.

Soon the appointed day came. I arrived at the airport early, my purse loaded with Bach Rescue Remedy and my pockets stuffed with treats. I must say I was nervous. It was like a blind date: Will she like me? Will she think I’m unattractive? Or weird? What if we don’t get along?

Then I saw a woman wheeling a large dog crate toward me. Inside was what looked like a Border Collie mix, panting and pacing and whining. Buffy? This crate had my name on it, printed in large black letters. Beneath my name was a sticker that read: CAUTION LIVE ANIMAL. The dog whined shrilly. For a moment I was dumbfounded—I had myself a new live animal. One who might not be any part Spaniel. Was this going to be another “Rex and the City” ordeal, in which I’d spend months feeling overwhelmed?

I reminded myself that I had followed my heart, and that the heart is always right. So I unlatched the crate.

THIS APPEARED IN THE MARCH 2011 ISSUE OF THE BARK MAGAZINE.Find out what happens next in the September issue of The Bark.
Posted by Lee Harrington at 8:52 AM