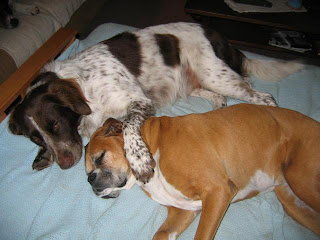 This is a cross-post from my blog on thebark.com
http://www.thebark.com/content/soothing-songs-anxious-pup


For the past few years, I’ve been moonlighting as a sound healer and also a kirtan walla. (Kirtan is a lively form of call-and-response chanting that originated in India thousands of years ago). Because this is a dog-related blog, I won’t go into too much detail about the human benefits of sacred sound and sound healing; suffice to say your dog can benefit too.

Back in 1998, before I had even begun to study sacred sound, I happen to notice that certain music had an unusually calming effect on my dog Wallace. (Wallace is my former beloved Spaniel, known to many Bark readers as the star of Rex and the City.)

There we were, the dog and I, sitting in our cramped Lower East Side apartment on a swelteringly hot summer night, wishing we were on another planet--one with air conditioning and more reasonable rents--and listening, as a consolation prize, to “New Sounds,” excellent hour-long music program on WNYC radio.

New Sounds is one of those programs that really can transport you to another planet, because the host, John Schaefer, always manages to find such spectacularly, ethereal music--the kind that transcends time, space, and the mundane.
Anyway,the feature CD of that evening was Canticles of Ecstasy by Hildegard Von Bingen, sung by the vocal ensemble Sequentia. Hildegard was a twelfth-century German mystic who began receiving ecstatic visions at age three and was sent to a convent at age eight. There, she began composing angelic canticles, said to have been channeled directly from the Divine.


I noticed Hildegard’s magic immediately--not only in the way it seemed to pulse through my body with a pure white light, but in the way my dog reacted. He was a Setter as well as a Spaniel mix, which basically meant that he never stayed still--not even in sleep. He was constantly pacing, sniffing, snuffling, hunting, flushing, pointing, galloping, grunting or, at the very least, panting--in a way that could get annoying in a hot NYC apartment. In his sleep he would woof, flex his paws, twitch his nostrils, and sometimes even groan in frustration--at not ever being able to catch that rabbit, perhaps.

But once Hildegard started playing, Wallace actually lay down--he rarely did that. Then he placed his head between his paws and let out a huge, pre-nap sigh. He stretched, one leg at a time, and positioned his body in perfect repose.

He knew I was watching him. I often stared at him, because he was so beautiful, and because I didn't have much else to do in those days of stunted writing.
And I could tell he was trying to keep his eyes open in that way dogs do, when they want to take a nap but also want to make sure they don’t miss out on anything exciting I might do at any second.
But by Sequentia's third canticle his eyes had lolled back into his head and he was out.

An ecstatic trance, perhaps? Would he re-emerge from this slumber speaking in tongues? Or at least in Latin?

My dog slept an entire hour. His breathing was so deep and slow I could barely see his rib cage moving. He didn’t once twitch or woof. And his muscles were completely relaxed.

By the time the program was over, I knew I was on to something. I called my then-husband immediately and suggested he pick up a copy of the CD on his way home from work.

Our lives changed after that. We had more freedom to actually leave the apartment once in a while, without having to worry about our overly-anxious dog. Our neighbors got so used to the sound of Quia Ergo Femina Mortem Instruxit drifting sweetly into the hallways that they began to get worried if it wasn’t playing.

Wallace’s entire temperament seemed to change--slowly but surely--in the same way my temperament would change, years later, when I myself starting singing and composing my own ecstatic chants.

Funny where life leads us.

Funny that sometimes we don’t even realize we’re being led.

We’re too busy trying to find new ways to improve the lives of our dogs.

And in the process, we improve ours. Because somehow, in some convoluted way, the fact that I was able to observe the effects of sound healing on my dog led me, many years later, to practice on myself.

But getting back to dogs: In 2004, after Wallace had passed and my marriage had disintegrated, I found myself adopting a new dog, Chloe. She's that Spaniel pictured above, with one of her one-night stands. (We can't even remember that Boxer's name, but boy was he fun!)
ANyway, Chloe had extreme separation anxiety when I first adopted her. In fact, she’d already had five homes in the first six months of her life, because her anxiety was so bad. Inexperienced dog owners simply couldn’t handle her whining, barking, drooling, chewing, escaping, etc... But I knew I could handle her. Because I had experience. And marrow bones. And Hildegard.
I played the Canticles of Ecstasy for Chloe around the clock. And within two weeks her separation anxiety had completely vanished.

Fast-forward to the present, and here I am with the Calmest Dog on the Planet. Pretty impressive for a Border Collie mix, I’d say. People always ask me: How do you do it? And I give three answers: clicker training, holistic nutrition and sound healing.

I’d say, on average, I play sacred music about eight hours each day. I believe this music purifies the space, and creates healing vibrations that re-align both me and my dog on a daily basis.

Sound is vibration, and our physical bodies respond to vibration--whether you believe it or not. Fast-paced, frenetic noise will increase our heartbeats and make us feel, well, frenetic. Erratic music will make us feel erratic. But soft, slow, rhythmic music will calm us. Drums beat at certain cycles can lower the blood pressure and induce theta states of mind. You might be saying, “Well, duh, this isn’t rocket science,” but actually it is.

Science has now proven that certain sounds have healing effects on certain parts of the body. The yogis and sages have known this for millennia, of course, but it takes these Western doctors a while to catch up with things. Now these Western doctors are witnessing cancerous tumors going into remission from treatments with Tibetan Singing Bowls, and bi-polar patients reaching a point of equilibrium by listening to a sacred gong.

So why couldn’t a dog with separation anxiety benefit from soothing music?

Why not give it a try? It’s easy and your dog benefits greatly. I swear even my house plants look healthier from the nonstop sacred music.

My recommended picks of soothing songs for doggy snoozing are:

My dog would second these opinions, but she’s currently asleep.

Posted by Lee Harrington at 5:10 PM